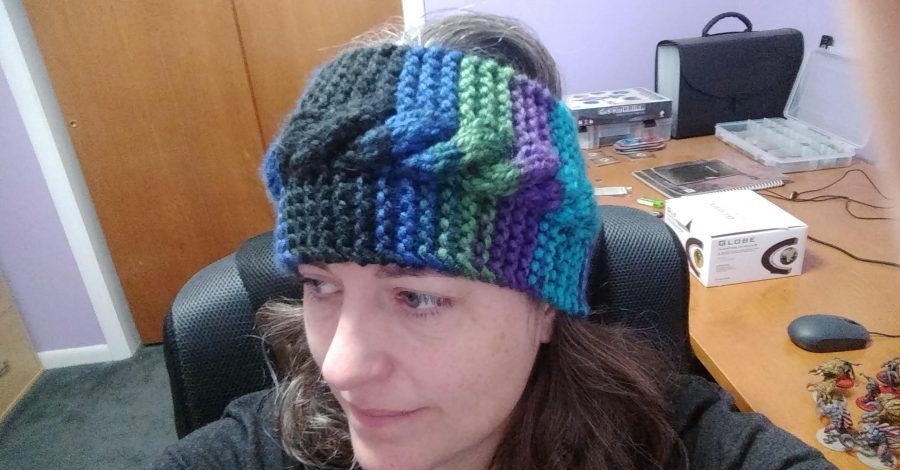 I used to be so excited to have yarn left over from each project I knit because it suggested possibility. I dreamed that I would use the yarn for another project some day.

Once in a while I would look through the leftover yarn and remember what I made out of it, whether it be a blanket, a sweater or a pillow. I’m guessing I used the extra yarn at times–no specific examples are coming to me now. More often, though, I’d buy new yarn.

Lately I’ve tired of simply looking at my old yarn and remembering former projects. I want to use up the skeins of yarn I purcase. And that is where the story of the headband-making boom begins.

I purchased a bulky weight, multi-colored purple, pink and grey yarn and a solid grey for a cowl for a friend.

My biggest knitting fear is running out of yarn, so I purchased extra. After I knit the cowl, I put the yarn aside and moved on to another project.

A few months later, I decided I’d knit a hat with the multi-colored yarn.

Once the hat was done, I had enough to knit something else, but not a whole hat, so I searched for a pattern.

I settled on a simple headband with a solitary cable. It turned out super-cute!

After I knit the headband, I used the grey to knit some mittens. There was just enough of the multi-colored yarn to knit the cuffs, so mission accomplished! I was done with that yarn. I may have some grey left, but I’m making progress!

I remembered that I had a similar multi-colored yarn with different colors. This was from a project I knit so long ago I don’t have a picture for it. The headband once again turned out to be super-cute!

Now, I’m hooked. I have found a pattern I really like for the bulky weight yarn I want to use up.
I had enough of the orange and cream/grey (on left) to start a headband. I didn’t have enough, so I coupled it with black and tan yarn for the back side (on right). Bam! Two more yarns out of the picture!

I inherited this sparkly grey and purple yarn when a friend moved out of town, so it is becoming . . . more headbands!

The only problem is that there’s enough yarn left for someting else but not enough for a headband.

I’m considering crocheting flowers to sew onto the purple and grey headbands. Another option is to bring the yarn to my knitting group and then it’s someone else’s problem–I mean, then someone else can have the joy of figuring out how to use it.

« Sabbatical Stories: Remembering My Worth

Perceptions of Finances // Part I »