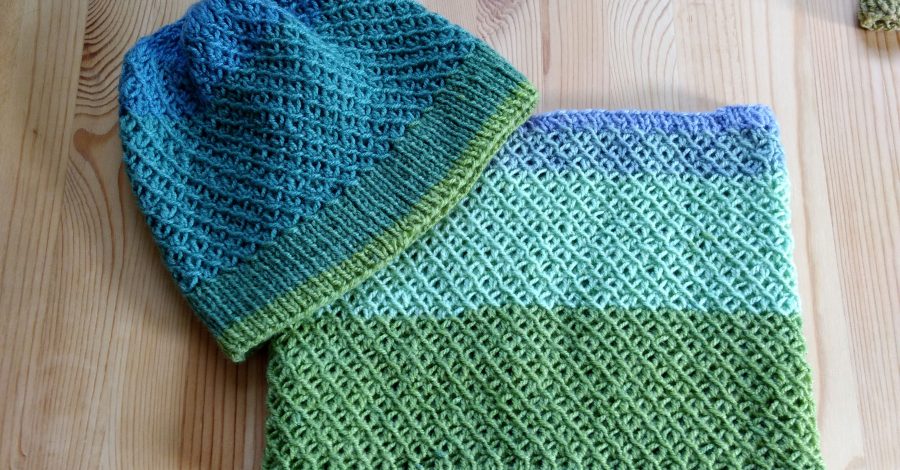 Every Saturday at 10:30 am central, 9:30 mountain, and 8:30 pacific time, I have a conference call with two women I met at a nonviolent communication in education conference. We met in Oregon in 2016 and have been committed to practice our NVC skills each week ever since.

Though we are in 3 different time zones and haven’t been together since the conference, we have gotten to know a lot about each other. I’ve been doing more knitting for others this year, and I decided to knit each of them a hat and cowl.

I had used Lion Brand Cupcake yarn for some shawls I made, and I thought the yarn would work well for a hat/cowl combo.

I picked my colors and started knitting. Every once in a while, I would think about which hat and cowl set I’d gift to which person. I felt good about whom I thought would like each color. The yarn is a bit thin for what I’m used to and the stitch pattern demands precision, so it took me a while to knit everything.

When I finally got them done, I got those suckers packed and sent. I am usually not great about getting to the post office, but I was so excited to see the receivers’ responses that I got right to it.

It only took 2 days for each person to receive her package, so we talked about them that Saturday. Both were very grateful.

I didn’t realize this until later, but only one of my friends sent a photo with her wearing the hat and cowl knit out of the color Apple Picking, which is a combination of red, green, orange, blue and brown. The friend who received the hat and cowl made out of the Forest Path color (blues and greens) had said she was going to put them on for a photo that morning, but didn’t get to it. I didn’t think anything of it until . . .

I received a gracious thank you and an honest note about how she loves the hat and cowl. They just didn’t work with her skin tone. It made her look washed out. She wondered if I wanted her to send the hat and cowl back or pass it along to someone whose coloring was more favorable for the items.

It may seen counter-intuitive, but I was honored to get that note. I knew it was difficult for my friend to express to me that the project I knit for her wouldn’t work. She didn’t have to send it. I haven’t seen her in 4 years and we don’t currently have plans to travel to see each other. In short, she could have easily said she loved the gift and then she could have passed it along with me being none the wiser.

I wrote her back thanking her for her honesty. I told her I’d prefer she pass the hat and cowl set along, and I wondered if I could knit a set with the colors of her choice. I told her my only request was that she not say no out of wanting to prevent me from taking the time to knit another set. I love knitting!

She accepted. I emailed her the yarn colors–this time using Mandala since Cupcake is discontinued. She gave me 2 color schemes she thought would work and said she’d like me to choose which colors would be more fun to knit.

I chose Harpy. The deep green color intrigued me and the neutral whites and greys would work with a lot of different outfits. I didn’t know what a harpy was, so I looked it up. A quick internet search brought me to this gorgeous harpy eagle. What lovely colors!

This set took a while for me to knit too, but as soon as I was done, I got it sent off.

She texted a photo a few days later, she loves the colors, and they look great on her! If they hadn’t looked good, though, I would have wanted her to let me know. Difficult honesty is sometimes how we get to learn about each other.

College During Covid // A Better Semester »